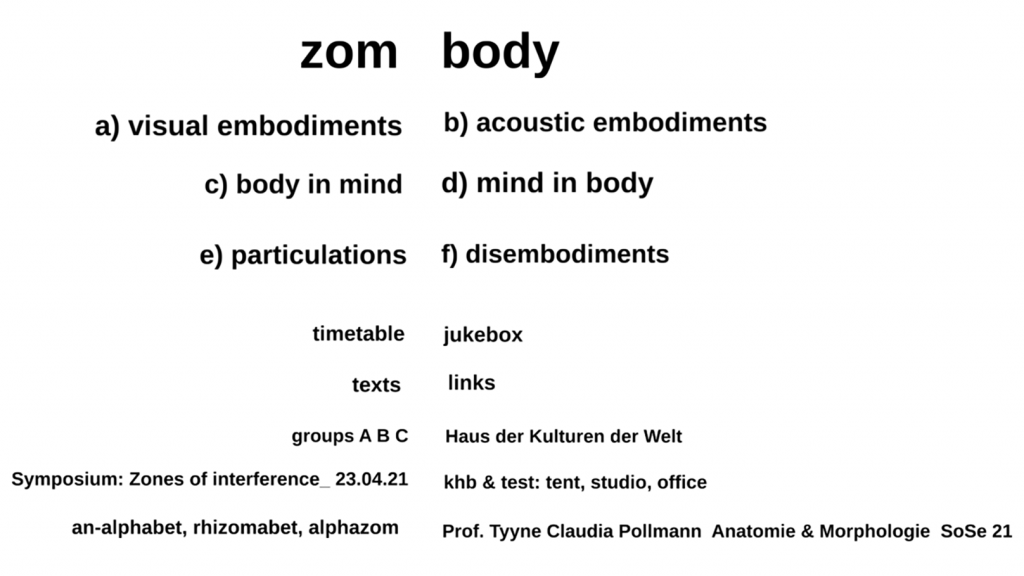 We created a joint installation with all students’ outcomes, and video focusing on The Making of Zombody.

And I created non-discursive text experiment, connecting all student outcomes: Call us Zom

The course was yet the most experimental course and questioned the teaching process in the most radical way, coded as: learning unlearning and unlearning learning.

Zombody originated as a face-to-face course with 18 students from the winter semester, who now finally could now get to know each other live. This happened at a very cautious pace at first: the masked students would sit in the studio, without talking, you could hear the scratching of a pen. So, the course differed very much from the usual pre-pandemic courses. In addition, distancing rules dictated that only 50% of the students could work in the studio at any one time. Nevertheless, as the course progressed – similar to the theme of the rhizome – an intensive exchange developed in small subgroups in the studio and with the complete group during excursions in the outdoor spaces. For the annual presentation at the open day, the idea developed to conceive the exhibition as a joint project and create a huge installation including all individual contributions. In a larger action, we set up the exhibition as a general rehearsal in midterm. The collective installation comprised of performances, sounds, scents, culinary and numerous interactive moments that could only be perceived live. Unfortunately, the open doors exhibition was cancelled, and we re-installed the works, just to photograph them.

Starting point for zombody is the great an-alphabet, which, with your contributions develops to a rhizomabet and alphazome, accessible via website.

From here, zombody queries our vulnerable, infectable/infected bodies that have been put into social distance and isolation for a year. What does this do to our minds, to our bodies, which have literally fallen under the table?

How to bring them up again, how to stop the gaze on the screen, the stiffness and the sagging circuits?

Looking forward to meeting you!

Zom is composed of 18 dividuals: a fluid multipersonal being: I/you/she/he/it/we/they.

We greet you from below. We are the rhizome-buddies: you can call us Zom.

Are growing underground, while you walk over us, without a clue. Shoes on faces, heels on heads – what faces, heads? We have so many. And if you stomp, or quickly run, we know your ways and shoot our roots. So please step in and bring your friends, we are already there.

First it didn’t work. He asked for body parts, as he was missing plenty of them: all. And he so much desired to come to life. Then, hopping on a limb, no ribs, no head, a few fingers and part of a neck may be. Multiple navels of unknown origin: that was a start! But a hard one, stiff, edgy, a cliffy road into Zom. (Kesniia). Other shared mental units and wonderlands, sounds, thoughts, voices. He melted and soon liquidized, leaking its way to the microsphere, fusing fine fragile chimeras, gliding genoms, hydrating, methylizing, lacing lucid dreams. Millimeters of shared intimacy. An evolution of softness: as if you could never get stuck. (Vicky). On her voyage through pasts and presents, realities and dreams, she adopted knowledges and histories from other related beings: 103 at least, may be more. These impressions left traces on her skin, which she discarded every now and then, remains, inscriptions, legible like pages of a book: themselves alive and in constant motion, for nothing remained fixed. (Diana). But during the lockdown, we all rooted in front of the laptop, frozen and gazing, diving in, mediating, sharing, spreading out, virtualizing in pixels and frequencies as we sank deeper into our chairs, backs sprawling and bones dissolving. (Haemin). And, as ordered, he isolated himself: then he hid even from himself, in the closet, at home, a hermit crab; he dissolved into time and space, shrank, grew, old before his time, his childhood and youth escaping through cracks and crevices – and after months, becoming girl and grandfather, simultaneously. (Yan).

Then back to the table, and after forever thirsting for water. Groping, you ventured to the sink, and slowly, humbly climbed the small step, opened the tap – only to discover your own blood spurting out instead, pouring into the room under which such pressure – then you collapsed into the basin. But your blood formed veins that grew into shoots and roots, seizing the space, populating it with parts, now coming to life as multiplicities. What finite release! (Haemin).

Our bed, brought from the dungeon and then the slaughterhouse, where lots of us had slept – how could we ever forget? – the dreams and dread: rest in peace and the only way is up. Again, the bed, horrendous embedding with no escape. Remainings remained. The sheet not sheer: we watched its fluids and remnants grow into a landscape of becoming. They and we now united in vision, as birds, flying over mountains and gorges, sailing, pirouetting, rejoicing, praising the view. (Julia). His food, once thoughtlessly devoured between bits and bytes, undigested, unseen and forgotten, engulfed in amnesia, now blossomed into unknown delights before his growing eyes. As if a new sense was to be born. How could this be possible? Would he have the guts? (Alma). Now trying, and with a first bite her spirit became an animal, all senses now awakened: taste, touch, smell, sound, sight: the finest melodies, modulations, shades and nuances, a feast for the soul. (Pipa). She pricked up her antelope ear and turned around: there she found a watering hole. But not one: many. But no, she didn’t drink, she watched, saw, listened to the sounds and reflections that resonated to her core – songs of belonging and harmony all the way to her heart, hips, and head, even through the rust and dust, the dirt, the black water, the poisons, and threats. (Luan). Spirit in each and every singing bowl: that was her way of drinking. (Pipa).

And then he took a step to the side and sank onto a cloudy, heavenly chair, or merged with his own shadow, which was now white and soft, embracing, embedding him, offering a floating rest. (Jihae). Head in clouds, what was it that he remembered? But now, head in the net…. Had he been fished from the sea, a-human-dolphin-crab-a-bird? Wreck-leak-cracks, fragments, fractions of seconds, emotive uproar, but the net, no more connection, no more (Alissa)…. no words, no thoughts, mindless drifting, floating, now that strange smell – no not strange, he knew it: this was his aura before his dance of nerves; m-i-n-d slashed, fractured, stroboscopic stuttering, collapsing realities, tensions exploding into cramps and a crescendo of shorts. In between, jumps of nerves, saltatory, fragments merging into new meanings, blending what had happened to her, with the crowds, on the web, across the planet. The Pope wiped away offers and beckoned to her. She knew it had to happen. She did not wave back. (Mano). Now he would have to let go and reconnect laterlaterlater, when the haunting was over. How many entities had he shared? He saw them emerging from the subconscious and sinking back in again, like a film in which he, watching it from a distance and from outside, became both spectator and actor of his own plays, making of making. (Franka). Then distorted faces appeared, as if preserved, in jars, frozen witnesses of something long past but real: relics, oddments of times and beings, withdrawn, alienated and yet lived through. (Jihae). Who had she been? She felt, through the fog that had followed the storm, her deranged brain taking shape again. She felt it crawling back, rustling, a hedgehog out of a box, regenerating, hydrating, synchronizing, approaching her again: touching whatever she saw, taking in and accepting all that came her way, like a child, a newborn, a reborn, now fresh and fine. (Ally). And with this return, an incredible joy rose from below, underneath the ribs, in the groin, in the gently swaying hips: something new was in the making: a new Zom-one. (Yasmin). He could already feel it moving inside him: a hand, a foot, an arm. Still only in parts, but dancing in miraculous ways, as if in trance, in fluids, in outer space; outlines, inklings that would still outgrow and shape. (Paul).

What would they be: a cat-a crab-a bat-a bird-a joy-a gesture-bon giorno into the nights, where had they come from, now remembering: drag-queen-rag-queen-rag king-raking, a lope-and-anti-lope, awordasword, on the catwalk, lacing its ways through mades and dones, ever-alert, alarmed (Laurin), and a fallen angel: gone to the dogs, back to earth with only three legs, scuffling, stumbling, dragging its rear behind, head tucked and on guard: muffled sounds, no sight in sight. (Alice). But a universe of smells, fragrances, fragilities, forever falling apart or melting away, in vanishing points of unbelongings. (all).