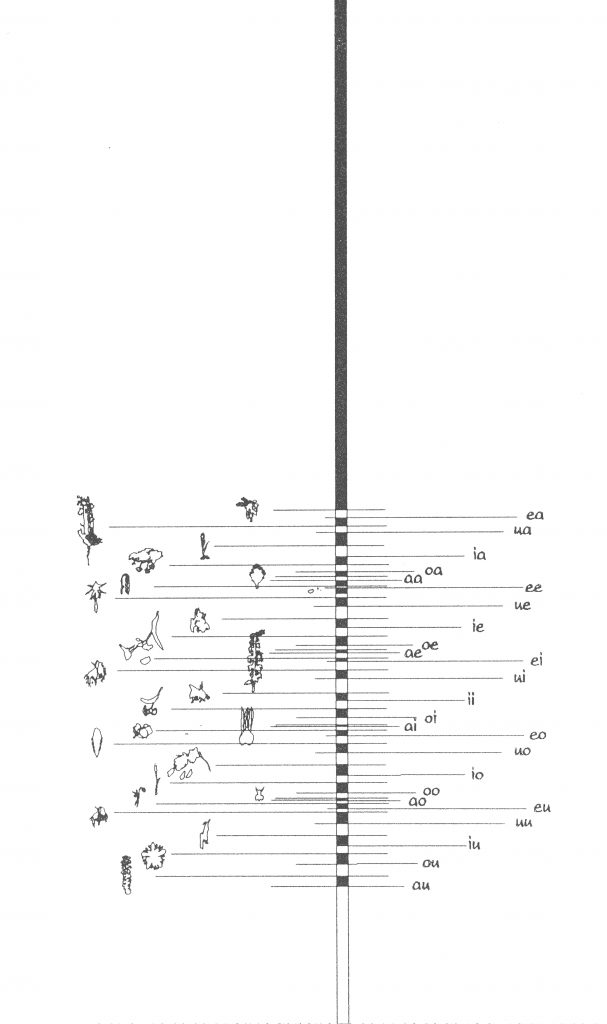 Note on the Scale, heterodox

The sections of the measures are from the relations of two interlocking fields. In the left field contains 25 contours, on the right field there are 25 diphtongs. The first vowels of the diphtongs, unlike the second ones, are not arranged in their conventional order. They no longer refer to the delimited field of a defining language, but to the vowels common to all languages, which, defined as feminine, voiceless, are “thought of” in different language regions, stand “between the lines” and represent the meaning-giving links between the voiced (male) consonants.

On the left side, contours of life forms are positioned. The signified offsets against the determiner; and the horizontal divisions of the scale sections are given ridges that extend into the opposite regions of the signified and determiner. The alternating black and white sections are formed by the ridges crossing the scale and reaching into the opposite field; ridges emanating from the contours end at the same length in the field of determination without encountering a determiner, while ridges emanating from the diphthongs reach different distances into the field of contours (and are staggered in length according to their initial vowel).

The central scale thus formed, which runs black above the markings and white below, acquires discontinuous sections because of the cross-references generated by the ridges.

It has arisen from the opening of the reference between the designated and the determinant; determination now no longer appears distinct and the entities outlined by contours stand in a free space regarding their assignment.

The scale thus ends the seemingly unambiguous fixation of the designated and the determining. It stands as an indicator for a changed relationship of value formation and works towards the abandonment of a fixed system.

The entities defined by means of the scale are freed from external determinations and fixations, develop their scale independently and refer to the possibility of a changed conception.